What do you think? Leave a comment to let me know, and you’ll be entered into a drawing for a $5 Old Navy gift card.  -Kara xxooxx

Heiress Ella Davenport survived a carriage accident that killed her father. Her life saved in exchange for savage scars marring her beautiful face. Her friends, socialites, showed their true colors, casting Ella aside like damaged goods and leaving her a social pariah. Even her wealth can’t buy her the kind of marriage she wants. Desperate to find a husband who can accept her despite her scars and, without knowing about her money, she seeks to become a mail order bride. Matchmaker & Co. is her one chance to start over and leave the pain and betrayal far behind her.

Nathan Ravenclaw was run out of town by the father of the girl he was courting once he discovered Nathan’s Arapaho heritage. It didn’t matter that Nathan was a successful rancher, businessman, and a positive member of society.  The white community suddenly saw only a half-breed. Even his money couldn’t buy him a wife. That was ten years ago.   He moved and rebuilt everything that cold rancher once took from him.  He has it all…except a wife.  Matchmaker & Company promises to send him a woman willing to start a new life with him.  But Nathan’s battered heart lacks the ability to trust. He longs for children, not romance.  His new bride, scarred and cast aside like himself, promises to be perfect for him.  Until he meets his mail order bride.  Fierce desire and an even more dangerous hope roar back to life within him.   Two things he swore never to indulge in again.

And love?  For these two battered souls, that’s the biggest risk of all… 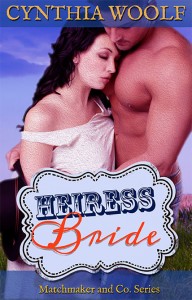 She arrived in Denver on April 6, 1871. A date she would forever remember as the start of her life. It was almost like another birthday.

The weather was cold. The wind rushed off the plains and collided with the mountains to the west, keeping the chill in the air. The buildings weren’t as tall as in New York, but the wind still whistled between them and over the platform where she stood. She was glad of her good wool coat and lined boots. They kept her warm while she waited for Mr. Ravenclaw to find her. There wasn’t anyone else wearing a veil so she didn’t think he’d have much problem identifying her.

She wasn’t really sure what she expected, but it wasn’t the tall, devastatingly handsome man that approached her. He had a square jaw shaved clean and a tiny dimple in his chin. Black eyebrows slashed over his eyes, the color of which was hidden by the shadow from his hat, pulled low on his head. For once she was glad of her veil. He wouldn’t be able to see her mouth hanging open, gawking at him.

Ella was surprised to find her hand trembled as she held it out to him. “Ella Davenport.”

He removed his glove and enveloped her hand in his big one. His fingers brushed the skin of her wrist just above her glove. The tingle that traveled clear to her toes was unexpected and her gaze snapped up to his. She looked up into the most beautiful blue eyes. They seemed to question the chemistry between them as much as she did.

He held her hand for what seemed like a lifetime and they simply starred at each other.

“Ella. I would like for you to lift your veil.”

“Are you sure you wish to do this in public. It can be…shocking.”

“I’m sure.” He squeezed her hand and then let go.

“Very well.” She lifted the heavy lace, prepared for him to be taken aback by the ugliness of it. She wasn’t prepared for him to lift his hand and gently trace the thin, putrid purple scar all the way from her left eye over her cheek and down her neck to the top of her collar.

There was no disdain on his face. His blue eyes took in everything and accepted it, but even so he said the last thing she expected.

“You are a very beautiful woman.”

She stood there with her mouth open until he raised her chin with his knuckle.

“Why are you surprised? Surely you have heard the compliment before.”

She shook her head to clear it and find her tongue. “Not since the accident, except from my brother. But he’s biased. He loves me.”

“He but states the obvious. Your scars do not detract from your beauty.”

“I must thank you because good manners dictate it. However, I believe we should see about getting you some glasses.”

He laughed. A rich, deep baritone. “I’m glad you have a sense of humor.”

You Can Find Heiress Bride at these Fine Websites

AND remember, wherever and whenever possible, support local! Thanks! 🙂