Crazy For You by Marie Higgins Reviewed

A quirky twist on the time-travel romance, Crazy For You left me guessing until the important reveal. Then, I held onto my seat because the speed  picked up to the end. 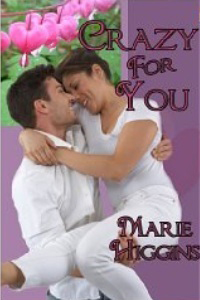 From Amazon’s page for Crazy For You:

How can a crazy man proclaiming he’s from the future soften a woman’s heart when he needs her help the most?

Fashion Designer, Kendra Whitaker is leery about the strange and terribly dressed man she meets…and she’s even more skeptical when he explains he’s from the future. She refuses to help, but the offbeat man charms her into it, and shows her what love is all about.

Eli’s very existence is threatened, and he needs Kendra’s assistance. The man she’s supposed to marry has locked Eli’s father in a mental institution. Joshua Montgomery must be released and put in his rightful spot as president of Montgomery Aisle. If Eli fails, he’ll not only lose Kendra, but life will cease to exist.

AMAZON LINK: Crazy For You

GOODREADS LINK: Crazy For You

Kendra is an entertaining character. I like the added touch of her fashion sense and morality of design–her cringing at anything unkempt or unbecoming. This introduces an immediate conflict between Eli and her. But where Eli is definitely unkempt, he is not altogether unbecoming. I write this tongue and cheek because Eli is pretty yummy.

The villain(s) appear in the story just enough for me to know who they are and for them to create serious roadblocks, but not for much more than this. In this case, no time is wasted to give the bad guys depth and complicate an otherwise fast easy read.

On the other hand, a few things had me scratching my head. For one, Kendra’s dry reaction to a disheveled man appearing out of nowhere, claiming he’s from the future and must save her father (who happens to be a Science Fiction writer). Being an offspring of an author who, no doubt, attended fan conventions, Kendra might have reacted beyond just saying more-or-less, “I don’t believe you.”  This was a huge opening–for some comic relief spiced with geeky innuendos–that fell short. But then again, whose to say Marie Higgins’s Kendra did not react exactly as Kendra would? Being around one geekdom too many may have jaded the heroine. This wasn’t a distraction once I got beyond that scene.

At first some time-travel ‘facts’ did not line up logically, but these inconsistencies were remedied before the end of the book, and in a final pleasing way. Which goes to show, it’s best for a reader to trust in the author who leads them on a unique journey.

This was a fun read. Different! Entertaining and chuckle-worthy in many places. Recommended for travel or a day at the beach. Solid Four hearts.