Saw the Movie? Read the Book! 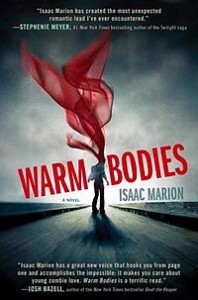 I recently saw the movie Warm Bodies and I’m not one to usually watch zombie movies, except for the occasional Resident Evil sequel. You know, where the zombies are shuffling around, perfect objects for target practice. For me, the big surprise with this story was the fact that it’s actually a love story, albeit a strange and sort of twisted one.  Moments were cringe-worthy but the love story is done in such a humorous manner that I would compare the love story to an old fairy tale. They’ve just replaced a cursed prince with an undead potential boyfriend. The spell might be broken by love. Not much different from Beauty and the Beast, brain-feasting aside. But I might add that R is a bit more amiable than Beast.

The audience experience was great. The zombie jokes hit their marks. The two leading actors were flawless in their delivery. That was vital because the precarious balance between mushy feelings and getting grossed out by mushy brains could have tipped that scale toward failure, at any given time.

I think the director did an amazing job keeping it oddly sweet. The actors approached the bizarre situation in a straightforward way. They weren’t hamming for laughs, thank goodness, which would have made the entire thing fall apart. R’s narration was vital to grounding the story as well, which I suspect is the case with the book.

After seeing the movie adaptation, I cannot wait to read it. -Kara