Rose Gorham has a New Book Out! 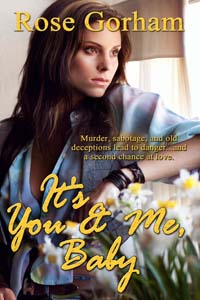 Murder, sabotage, and old deceptions lead to danger…and a second chance at love.

When Janet Sanderson opens her door to Brad Temple, the past comes rushing back. Six years ago, Janet and Brad’s brother Martin were in love, but Brad’s lies tore their world apart. Now Brad greets her with the news that Martin is dead.

Brad has been in love with Janet since they first met, but she belonged to–and betrayed–his brother. Now he must tell her that not only was Martin murdered, but Brad needs her help deciphering clues Martin left behind. Clues that might point to the culprit who’s been sabotaging their business–and to Martin’s killer.

As they put the pieces of the past and the present together, Janet and Brad realize Martin duped them both. Can they uncover the truth and find a second chance at love before a killer strikes again?

I worked as a librarian for sixteen years in a small town in Missouri where I live with my husband Larry. Our children are all grown and married and live close, making it easy for us to visit the grandkids.

My enthusiasm for romance novels began when my sister-in-law loaned me a Harlequin Romance called Dark Star by Nernia Hilliard. That one book and I was hooked on romance and forever-after. But after awhile I wanted more than a love story. I wanted murder, mystery, mayhem! So I started reading Romantic Suspense.

As far back as I can remember I’ve always enjoyed people watching and would make up little scenarios about them in my head. What I hadn’t realized was that those mind exercises were my prelude into writing.

My favorite hobbies, going for walks with my hubby and snapping pictures of animals and nature help to clear my head when I’m having a problem with a plot or when one of my character’s gets snippy and decides to rewrite the story.

Although I enjoy reading almost any genre, I love writing Romantic Suspense with a touch of humor. It doesn’t take much to stimulate my writing juices, and before I know it I’m building a plot, casting my characters, and choosing a weapon. Which reminds me, never pick up an ice pick at a garage sale turn to your husband and say, ‘Hey, hon. Wouldn’t this make a great weapon?” People tend to eye you suspiciously.

Like what you’ve read? Find out more about Rose’s other book From Within HERE: https://deyforlove.com/highlighting-rose-gorhams-from-within-today/

2013-10-11
Previous Post: Cover Reveal! Tera Shanley’s “Love in the Time of the Dead”
Next Post: Angela Smith Interviewed AND a giveaway!