Review of “The Ex Who Conned a Psychic”

Her new friend Teresa, a professional psychic and medium, may be able to help. However, before she moves Charley on to the next life, she needs his help in contacting her own dead husband to find out who murdered him. His ghost isn’t talking, and if they can’t find his killer, Teresa could go to prison. Amanda would lose not only a friend but also the possibility of getting rid of Charley. The facilities for spiritual progression in prison are limited.

While Amanda is trying to help Teresa find her husband’s murderer, a man from Charley’s past shows up with a document signed by Charley giving him possession of Amanda’s motorcycle shop and apartment. Surely Ronald Collins doesn’t really believe he get can away with that, but after he shoots Amanda’s live oak tree and burns her truck, she realizes the man is serious…and psychotic.

Amanda just wanted to get rid of her ghost. Now she has a killer, a crazy man, and two ghosts in her life.

REVIEW of “The Ex Who Conned a Psychic: Books Three of Charley’s Ghost”

I received a copy for my honest review.

There is a tongue-in-cheek ghost story lurking within this cute cozy mystery. Poor Amanda! She’s plagued by a dead ex (and a dead ex-con at that) who offers her no privacy, no room to breathe, but plenty of intrigue and complications. But poor Charley, too. I can’t help but have a soft spot for the sulking specter. Add to the mix, a sexy detective and a former prom queen turned psychic (with her own trunk-sized marital baggage) and you’ve got a caper worth a good night of carmel popcorn and a bottle of Kim Crawford’s sauvignon blanc.

This is the first of the series I’ve read, but I was able to easily catch up on the main characters and their pasts. There were a few laugh-out-loud moments. Just a really fun, light read. I will return to read the first two, I’m sure.

I only review books that I like. Book Three of Charley’s Ghost gets 4.5 stars. 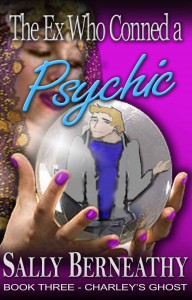