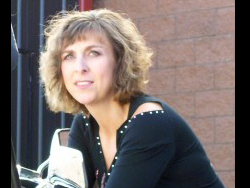 Today it is my pleasure to have author Tracey Cramer-Kelly on Dey for Love. She’s a busy gal. Author. Musician. Producer! Plus her romance novels with a military flavor have won Military Writers Society of America Gold Awards and are finalists in the Next Generation Indie Books Awards.

KARA: Have you fought with your characters? Who usually wins?

TRACEY: Frequently! And they usually win! In my first book (Last Chance Rescue), the antagonist got too big and tried to take over the story; I had to cut him off at the knees. He wouldn’t go, however, until I promised him his OWN book (hmm, never did get around to that, although the storyline is all there).

I recently completed my first short theatrical script, which wasn’t what I had intended to do at all. In this case, I simply wanted to compose a performance piece for taiko drum (which I have studied for several years) with a more modern movement emphasis. Shortly into it I realized that the two main players had a story – and they wanted ME to tell it! I remember a week between Christmas and New Years when I fought those characters like crazy. Finally I called up my taiko partner and said, “how do you feel about this project becoming much bigger?” (We’re now looking for an independent producer to help us create a promotional video for that project.)

KARA: Do you have a daily writing ritual?

TRACEY: There is no such thing as a typical day when you own a business and have active kids (my kids are 5 and 10)! So my writing time is “stolen” hours whenever I can get them (I’m writing this in a coffee shop). It makes it harder to get into the “flow” but I’m proof it can be done if you want it badly enough! I also daydream anywhere and everywhere, so that when I do sit down to write I have an idea where I want to go.

KARA: Are you a plotter, a pantser, or a hybrid?

TRACEY: I am an incorrigible pantser! Even when I try to “outline” a story (I use the term loosely), the characters will ambush me at every corner. I do envy (just a little) those who can sit down and write out a complete outline and then follow it. Perhaps they can complete a novel faster than I can. But being a pantser allows you to be surprised by your characters (“you used to do WHAT?”), and I love that.

TRACEY: I would dearly like to write short story or novella. The satisfaction of actually completing something would occur more quickly (and conceivably more often)! But I absolutely LOVE digging deep into a character, putting them under stress or pain with some good plot twists, and seeing what they’re like on the other side… so even when I think I’ll write something “shorter” it tends to deepen and expand.

KARA: What have been your greatest obstacles?

TRACEY: I view TIME as both my biggest obstacle and my best gift. It’s a gift because, thus far, I keep waking up every day! And, I have a full and blessed life that I wouldn’t trade. BUT, I have to force myself to make “butt-in-chair” time.

KARA: When you feel a moment of indecision or self-doubt, what have you found to be the best method or trick to get out of that nasty funk?

TRACEY: The absolute best remedy is my motorcycle. I’ve been a biker chick for over 20 years. There is nothing like a ride to clear the mind. Banging on taiko drums is also very cathartic!

KARA: Excellent! Have you been published in small press, big press, as an indie, or a combination? Why did you make this decision? If you chose indie, what was the ‘turning point’ for you?

TRACEY: When I completed my first book (Last Chance Rescue), I had no writing credentials to speak of. I tried half-heartedly to find an agent, but when a friend self-published her book, I decided I could too. Since Last Chance Rescue was a finalist in a few contests (including the Indie Awards) and I had a few other writing successes by then, I tried harder with my second, True Surrender.

True Surrender deals with some heavy topics – wounded veterans with PTSD and other injury. There is romance in it, but to me, the heart of the story is Aaron’s personal journey. I got very nice rejections (er, comments) along the lines of “it doesn’t fit the typical romance genre.” Well, heck, I wasn’t looking to write a formulaic romance anyway!

What really amazed me was that as soon as I decided to self-publish True Surrender, into my life came just the right person – a catalyst that pushed me to do something else I’d dreamed of: creating a music video (I’m also a vocalist) with scenes from the book. I could not have made “The Rose Surrender Version” had I been traditionally published. (And I dare say, I would never have produced my second music video, “Cool Rider.”) You just never know what the universe will do when you’re open to it! (You can find both videos here: http://www.traceycramerkelly.com/music-videos/)

With Take Two, my Hollywood romance due out this summer, there was no question. I’ve spent four years building my platform, and in that time traditional publishers have done even less for authors, yet still want a piece of their work. I’m a bit of a control freak anyway, so it suits me to be in charge of my own destiny (not to mention own my own hard work).

KARA: (Can I hear an “Amen!”) Tell me about your book. Why did you write this particular story? Was it simmering peacefully on the back burner or did it startle you like a kitchen flash fire?

TRACEY: I like to say that my second book (True Surrender) led to my third. The experience of seeing my writing come to life in the music video (mentioned above) was exhilarating and empowering but also humbling. The seed for Take Two was planted then, but as is often the case, the characters told me what would happen next!

My soon-to-be-released novel, Take Two, is about an up-and-coming actor who is poisoned on the set. When he’s forced to recuperate at his Harley-riding (female) director’s home (with her two teenage daughters), he has no idea what he’s in for.

What’s fun about this is that I’m sharing the book for FREE. Each week I’m posting the next “installment” of the book on my blog. Join me here: http://www.traceycramerkelly.com/read-my-next-novel-for-free-heres-how/

KARA: That is an amazing idea. Going to check it out. Thank you so much for sharing your experience with Dey For Love, Tracey. It’s been great! 🙂 Readers, more links to Tracey’s world are listed below so you can keep posted on her latest endeavors.

Other LINKS and INFO from Tracey Cramer-Kelly:

My “hub” is my web site (www.TraceyCramerKelly.com)

Take Two installments will be posted to my blog: http://www.TraceyCramerKelly.com/blog

Where to Order: http://www.TraceyCramerKelly.com/store (it will take you to your choice of e-reader or print)

When a 29-year-old Hollywood actor is poisoned on the set, there’s only one logical thing to do: move in with the 41-year-old Director and her teenage daughters.

For Zac Davies, acting has been a way to live someone else’s life ever since his parents were killed. This is his Big Break—and he can’t afford to screw it up.

Director Gina Devereaux has made a name for herself despite the fact that a past humiliation—and broken heart—nearly cost her her career. She’s not about to let anyone close enough to do that again. Especially an actor.

But when the producer threatens to destroy everything Gina and Zac have worked for, she puts her reputation on the line…and allows Zac into her life until he recovers.

Away from the set Zac discovers that Gina is not who he thought she was. She and her daughters give him a whole new outlook on life…and an unexpected gift.

But once back on set, Zac and Gina’s friendship is sorely tested. In the media frenzy that follows, Zac fears that his tragic past and uncertain future have become the story. He must decide where his heart lies: in the world of bright lights and fame…or in the arms of a motorcycle-riding, small-town-at-heart woman with a big chip on her shoulder.

Comments and questions? I am working with a new  filter and promise to be checking on it throughout the day, in case there is a delay in posting–have no fear, I’ll get your comments up for Tracey! –Kara xxooxx